The Penzé & rivers of Morlaix 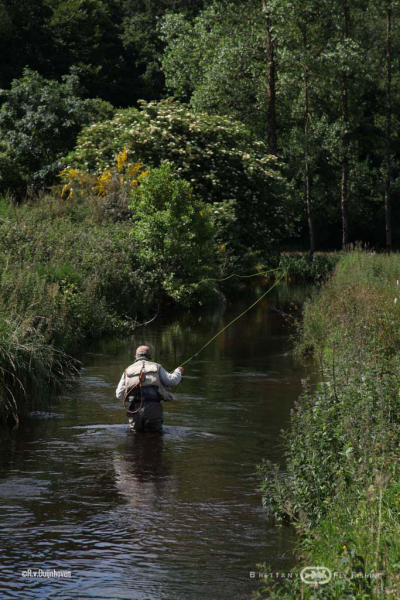 The Penzé, the Queffleuth and its tributary, the Jarlot are the so-called rivers of the “Land of Morlaix”. Theses modest streams all rise in the Monts d’Arrée, two of them (Penzé & Queffleuth) in close proximity of my home.

The Penzé (Penzez in Breton) is the name of a little coastal stream of the Léon region in Finistère. Its source is located at the foothills of the Roc’h Trédudon, in the Monts d’Arrée, within the community of Plounéour-Ménez.
Its first few miles see it flowing to the west, through my hometown of Commana and it then continues towards Loc-Eguiner, then veers off to the north, passing through Guimiliau, Saint-Thégonnec, Guiclan.
At the community of Taulé (between Saint-Pol de Léon to the west and Morlaix in the east) it widens, forming an aber or estuary near the village of Penzé, giving it its name. Its main tributary is the Coatoulz’ach on its right hand side.
The lower reaches of the Penzé, managed by the AAPPMA of Morlaix, harbors some very nice trout and a handful of sea trout. Its crystal clear waters with great weed beds in a lush green color (water starworts and ranunculus) are a feast for the eyes and fly fishing is particularly interesting right before the summer doldrums.

I very much love the Penzé, it is a pretty stream in close proximity of my home and a great place to show deserving customers who are enamored with pretty trout streams. Its upper reaches, managed by the AAPPMA of the Elorn is also very pretty and “chock-full” of trout.

The Penzé ranks among my favorites in Brittany and I’m enthusiastic about showing it to my more experienced customers who would rather fish for bigger fish than for sheer numbers of trout.

From its source on the slopes of the Monts d’Arrée to the canalized portion under the city of Morlaix, the Queffleuth is small coastal stream of some 20 kilometers in length. It sometimes flows through a narrow forested valley, is then interspersed with a maze of rocks and then suddenly meanders through pretty meadows, its width rarely exceeding 22 feet. All types of waters can be found here: mountain stream or deep, slow pools, the Queffleuth has it all and it is home to a nice population of brown trout with some specimen that push the 20-inch mark. It also has an occasional run of Atlantic salmon and sea trout.

The Jarlot is a little stream of about 20 km in length, rising in the southeast of Morlaix within the communities of Plougonven and Lannéanou, its main tributary being the Tromorgan. It joins with the Queffleuth in Morlaix, following a southeast-nortwest axis in a staircase-like profile with slower portions followed by steeper portions with faster waters, never exceeding 20 feet in width. Quite shallow, it is easy to fish wading but anglers will need short rods in lengths 7 to 8 feet. Having a somewhat later emergence of Danica mayflies, those can be quite spectacular at times. 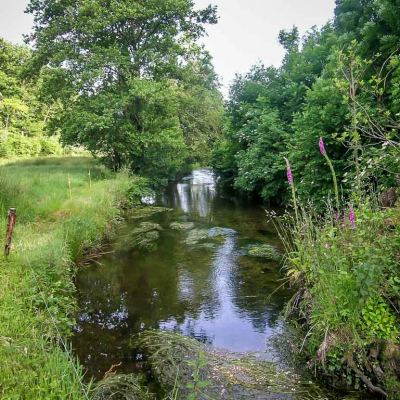