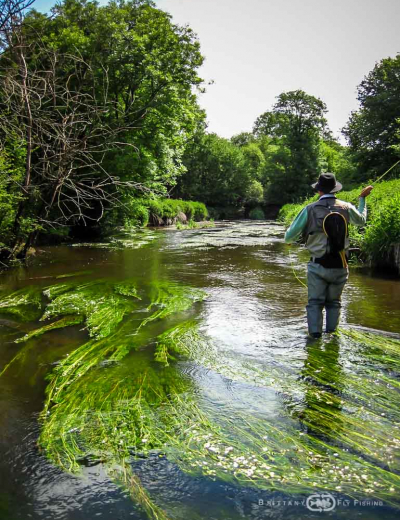 The Hyères rises in the Côtes d’Armor, among the communities of Callac and La Chapelle Neuve, and is one of the main tributaries of the River Aulne, entering from the right side. After a course of 25 km, it enters Finistère above Carnoët, uniting with the waters of the canalized Aulne (that joins Nantes with Brest) upcurrent of Carhaix. The overall length of the river is 48 km. The Hyères is managed by the AAPPMA of Callac (the “ world capital ” of the Brittany Spaniel) on its costarmorican portion and by the AAPPMA of Carhaix on the finisterian portion.

The Hyères in one of those rivers that have a particular sweet spot in my heart as it seems unspectacular yet can yield some very nice surprises. I will not divulge the better river sections and the sizes of fish to people other than my friends and customers.

What I can tell, however, is that the Hyères is a pretty stream flowing through meadowlands and wooded areas. Its average width is between 5 and 6 meters, with a sandy, sometimes muddy, river bottom. There are nice riffles and runs interspersed with some nice, deep pools, haunted by the better trout in the stream. Banks are well maintained by the roots of superb alders. Many relevant families of aquatic insect are present: ephemeroptera and trichoptera abound but it’s the Danica mayflies that create massive hatches in early summer, possibly the most impressive hatches of the sort I have had the privilege of witnessing in Brittany.

Fishing is done by slowly wading the riverbed, mostly presenting dry flies on a short line with short rods (7’6” à 8’6”) with a nervous yet powerful action (4 to 5 weight rods) to be able to quickly play bigger fish that inevitably will surge for cover, once hooked. Cover will be plenty in this great stream: submerged stumps, roots, sweepers,…

It will be a pleasure for me to guide you on this unsung river, from May to the late season, spring being the better period to fish all day long. During the height of summer, anglers fare better in the mornings and during the wee hours in the evenings. Mayfly season, from late May to early June, must not be missed and requires an early reservation if you happen to need guiding in this fine water. 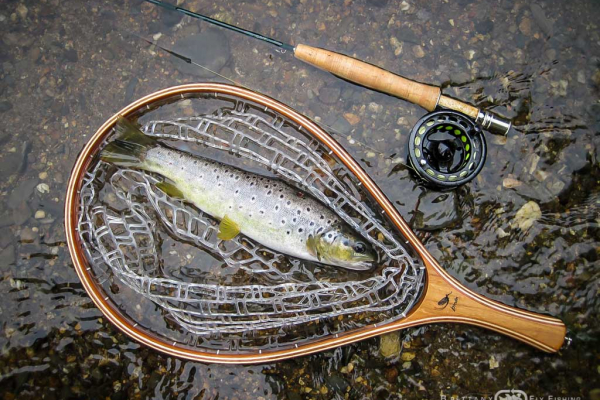