This is my home river and my entire youth has been spent on its banks as my family originates from the region of Lannion in Trégor and my parents are still residing there, right on the banks of this great river. It has made me the angler that I am today and has nurtured me with unique emotions that are connected forever to this magical river, often considered among the most beautiful rivers in Brittany. I will certainly not contradict this as I share the same thought with many anglers and a few friends.

The Guer rises at an elevation of 270 meters to the west of Bulat-Pestivien, in the eastern reaches of the Monts d’Arrée, just a few kilometers from the Blavet that rises on the opposite slope. At Belle-Isle-en-Terre, it meets with the Guic, its main affluent, to become the Léguer. Its course comprises a total of 62.3 km, 9 of which are the estuary and it enters into the bay of Lannion between Beg Léguer and the point of Dourven. Its flow towards the sea – which at 5.1% makes it quite steep and quick – is met by the waters from several tributaries, the Frout, the Saint-Ethurien, the Milin Rann (or Kerlouzouen stream), the latter meeting the Léguer right in the middle of the town of Lannion and influences by the tides. I have gone great lengths to describe the Léguer from an angler’s point of view over the years and, as avid readers of Plaisirs de la Pêche, the magazine I used to be the editor in chief of until 2005, you probably might remember this.

On sections where I guide, the river is about 8 to 15 meters wide and offers alternating characteristics: somewhat faster water with riffles and runs, wider, slower channels and holes, formed by former mill pools that have lost somewhat in depth as weirs had to be open due to advanced river management that promotes free circulation of migrating fish species. It also limits the warming of the waters during the summers and the calamities of eutrophication. The river bottom is mostly freestone and sandy with enormous granite blocks forming a real maze of currents, giving the river a magical wonderland aspect, especially when those enormous rocks, polished by millennia of exposure to water are ornate with mosses, lichens, and several species of ferns.

The river valley, for the most part, is V-shaped: narrow, abrupt and very deep.
The exception can be found near Belle-Isle-en-Terre, where the Léguer forms a series of meanders through a relatively wide valley floor. It is quite a wooded area that plays a major role in limiting the washing out of agricultural runoff into the river.
The waters of the Léguer run very clear but retain a certain amber tint, a bit like the color of Scottish or Irish malt or maybe a well-infused Earl Grey tea. This does not prevent the angler to see the fish lying along the banks on bright sandy patches. The river bottom sports a series of unique colors; in my eyes I see certain rocks in carmine reds while other are almost golden.

It has perfectly adapted to its environment, feeding opportunistically on what is present. The trout are extremely cautious and will disappear at the slightest possibility of threat. They will feed with abandon on the surface during hatches, yet they will always keep an eye to the surface, a well presented imitation will draw interest on behalf of the trout.

The Léguer is a paradise found for blind casting as there are so many spots to fish: weed beds, edgelines, rocky areas, sand banks, backeddies…

The trout can be found everywhere and the bigger fish usually hang out in the most improbable and most remote places. An adult trout is a strong opponent with everything wild and healthy fish are renowned for. 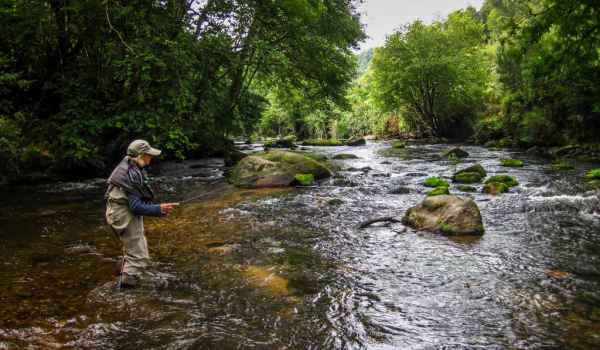 What an emotion it is to be able to marvel at then release a beautiful Léguer trout.

The overall size of the trout might be inferior to the size found in many other streams in Brittany, but it is largely compensated by it sheer beauty. Bigger fish remain possible, though, on this magical river and fish close to 40 cm are always possible and especially sea trout are numerous (finnock) that, like resident trout, will also grab insects off the surface.

The Léguer also has a healthy run of Atlantic salmon, healthy enough for me to offer guided fishing upon request, preferably in spring and during the late season.