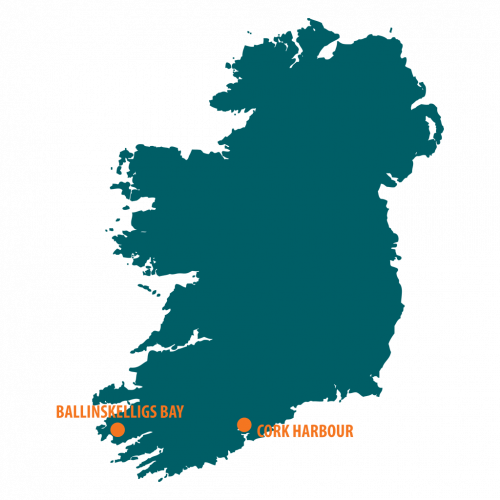 Ireland is THE European Seabass angler’s paradise as fish populations have been subject to a draconian protection for many years. Commercial fishing for seabass (Dicentrarchus labrax) has been prohibited since 1990. As of 2007, a harvesting limit of 2 fish over 40 cm per day (period of 24 consecutive hours) has been put in place and during spawning season (May 15 to June 15) all fish must be carefully released. The logical result is a great number of large fish with a median weight of about 4 lbs with many bigger fish available, which is a unique situation for European fly anglers.

Sumptuous Ballinskellings bay, warmed by Gulf Stream water, has many fly angling venues on offer, whether you fish from a boat or on foot, wading the immense sandy beaches or climbing the rocky shores of the Inny and Currane river estuaries. Pollack haunt the rocky depths or the kelp beds along the cliffs that literally line the bay. Populations are plentiful in both number and size and their presence in waters shallower that 10 meters allows the use of sinking lines. Fish of 4 to 8 lbs are numerous.

Bay of Cork or “Cork Harbour” with its coves and channels is protected from westerly winds and are the home of the largest population of seabass in Europe.

I have developed a seabass fly fishing program amidst this sea angler’s paradise. In partnership with local fishing guides, I am organizing seabass and pollack fishing trips onboard my fly fishing boat that I usually use in my home waters of Brittany. The use of this electrically propelled boat (consult the Fly fishing Boat section for further details) allows me to quietly and safely approach all the better fishing spots, the best possibility to outfish shore-bound fly AND spin anglers. I will assist small groups of up to 4 anglers that will fish with me and with an Irish colleague in rotation. In the Bay of Cork we will fish from two boats while my Irish colleague in Co Kerry will walk the shoreline with fly and spin tackle.

In case of inclement weather conditions in the ocean, there will be alternatives to save the day: river trout fishing (dry fly), sea trout in lakes (boat fishing) and river salmon fishing. 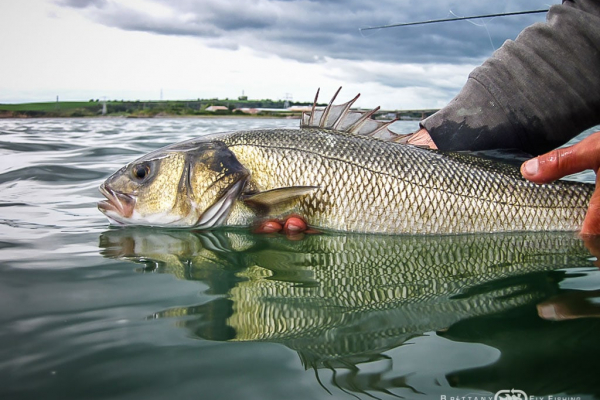 The Irish West ranks among the finest destinations to fish for European sea bass and Pollack; fly anglers are most welcome to wet their lines here. It is an almost untapped territory and the sea bass grow big, largely unmolested. A bass of 4 to 6 lbs is common thing in Ireland; in Brittany it would raise some eyebrows for sure. I can realistically claim that my knowledge of sea bass angling techniques, surface or deep fishing paired with the great possibilities Western Ireland has on offer, anglers stand excellent chances of connecting with trophy fish. Pollack fishing with fly tackle it also quite thrilling and fish up to 10 lbs are a real possibility in fast sink line territory.

In general, my organized trips to Ireland are aimed at confirmed fly anglers that know how to handle their tackle, can double haul some decent distances (reservoir/pike fishing experience is much recommended).

I am putting together tailored group trips to Western Ireland, with the possibility to combine Cork Harbour and Ballinskellings Bay. These stays that include a minimum of 6 days fishing usually take place during the peak angling seasons from late June to late September/early October for groups up to 4 anglers.

I will welcome you on-site (Cork or Kerry airports), will assist you and translate and will guide you onboard my boat with technical and strategic advice.
Several possibilities exist as far as lodging is concerned: **** hotels, cottages with full board or B&B.